Our development department is not only focused on pushing boundaries, but also sharing knowledge. With that idea in mind we developed ‘Student Dev Quest’, which gave young people a unique experience and recognition for their efforts.

Interns are great. When you look at them as a group, they’re mostly a young colorful bunch ready to take on the world. They have a modern approach, and a good grasp on technology and the direction the world is going in.

Over the years we as a company have become very fond of our interns. In our development department, we have had an internship for about a year and a half now. It is practically the last department to get seriously involved with interns.

Well the first thing that seems to be the problem is the actual knowledge. PHP, javascript, programming in general, servers, applications, they all learn it in class, but only a few of them actually start using their knowledge and make something. The other problem is, they are rarely looking for a “job”. The ones that can actually sustain a development job are already doing it, be it for a company, a friend or an interesting project of their own.

And the remaining few that want to work for a company like ours, need to be targeted, discovered and reeled in somehow. :)

So the idea was, how to get the word out that we need development interns, to familiarize the community with our company, give out a scholarship, and find some talent that was not on our radar for some reason or another!

We already had the concept of Sponge, so we decided to adjust it to our idea.

The plan was simple, when we thought of what developers enjoy, what they seek in life, one thing was clear, they love solving problems. All of our current developers are trouble makers :P. Being big fans of hackthissite and notpronish kind of ideas, we quickly agreed that this is the way to go.

We decided to produce in-house “quests” to challenge young developers during the week, and every Friday have a little gathering at our office to introduce our  company, philosophy and environment to them.

We made an introduction sign up page where they could apply if they are interested and the word was out.

During the 2 weeks of promotion, 54 people signed up. That is a lot of people. Of course we were thrilled with this kind of response, but sadly, do to logistic issues in our office, we had to choose 30 applicants, as we could only provide for a maximum of 30 people coming to the weekly gatherings. This was actually one of our main focuses, not only to make our applicants “work” and solve development problems, but to also get to know us as a company and as people.

After closely inspecting all of the applications, we have decided on our 30 bright minds.

During the planning phase we actually had no idea how much fun it will be to produce these weekly “missions”. The first week we produced 7 quests. Internally we were challenging each other with weird ideas and actually created new quests with the ideas that came to mind while we were solving them. After the first week we thought we were out of ideas, yet somehow, without any problem, on Monday we managed to have another 7. The third week was a little bit lighter, with only 4 quests, by request of our dear “Sponges” that they would like a few quests less and a weekend to try and solve them, their current college obligations being the main issue.

And the last week we had a big one, that by everyone’s opinion was a great one to finish it all of and leave it to be the only quest for the last week. We also had a “Visit” quest which you solved at the end of the week when you came to our office.

When it all began, I had no idea what to expect of the weekly meetings.

Will people show up? Will they get the quests? Will they think it’s fun or just a huge waste of time?

To every single one of those questions the answer was in our favor. The first week 18 people showed up and were thrilled with the concept, the gathering, and the actual problems they had to solve. Through weekly gatherings we introduced them to us, our flow, our products and what exactly we do here at Degordian. :)

What did we get out of it?

We got some good ol’ developer fun. Coming up with problems, letting other developers figure them out, figuring out theirs. We got to know 20-ish talented and interesting people that came to the meeting every week, we managed to tell them a thing or two about what it’s like to work at Degordian, and we rewarded one very talented young Developer with a scholarship. :)

What did they get out of it?

Well I hope that through our lectures, they got to know a little about how things work in a company like ours, what the difference is between projects in college and the real world. One sentence that stuck with me was “A lot of stuff I’ve learned while solving the quests I use every day now”. That alone is an achievement. :)

Of course, last but not least, we must announce the winner. The scoring was based on the amount of quests solved, the time spent solving them and the amount of visits to our weekly gatherings.

We hereby congratulate Marko Kruljac Kru for successfully solving almost every quest we threw at him and winning the first “Sponge Dev Quest”. He continued to be a great developer and challenge himself the way we challenged him by participating in our project ‘Startup in 24‘. :)

In conclusion, I must admit that the whole project was a great success. It was fun, it brought people together, we learned a lot and even managed to make a few pretty cool little quests along the way.

If you’re interested, here is the full list of missions that we’re served to our Sponge participants. See how much you can figure out :)

The idea is – you will always have a clear “Answer code is xxxyyyzzz” when you’ve reached the end of the quest. Almost every quest has a unique answer (except “maze4d” that has 4, “Look, Im famous” which is special and “Paint!” which has a case insensitive answer).

You have a month. :P 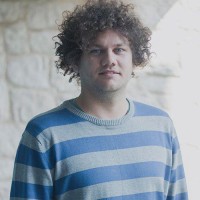 A developer with a strong passion for sitting. Capable of coming up with ideas that make no sense, yet mostly do. Has weird friends.

All stories by Tony