We recently visited Web Summit, the largest technology conference in Europe and one of the trademarks of Dublin. There’s always a lot of excitement around the Summit, so let’s talk about the unique experience it offers.

Web Summit consists of 3 days and 4 nights filled with speeches, ideas, panels and technology as well as new friends and acquaintances. It’s hard to find so many clever and enthusiastic people in one place, that are both full of passion and share the unique drive to create something new.

Being in such an environment just feels invigorating. I have never heard so many stories about failure and how great it was.

Kevin O’Malley, US Ambassador in Ireland, said it best in his interview for Dublin Globe:

‘Failure isn’t the end. It’s what you do after you find out that it doesn’t work. Many of the ideas you see here at the Web Summit aren’t going to go anywhere. The people behind them will, because they’ll learn from their failure.’

I’ve been all over the summit and saw everything that was happening at Build, Machine, Marketing, Data, Sport and Content stages, and it was just great. I am just really sorry I wasn’t able to see all the others, because there were some amazing talks from Michael Dell, Pixar, FanDuel, Dan Brown and many more.

Google announced Smart Reply and free access to Google Apps for startups. Facebook will offer virtual reality for everyone as Oculus VR goggles hit the stores for Christmas. Bill Ford presented his vision in which the automobile giant transforms into a transportation company, while Yancey Strickler from Kickstarter talked about transforming the investment platform into a public benefit organization.

The general conclusion is that marketers need to make best-in-class adverts that don’t disrupt user experience, and that consumers should be able to participate in the ad cycle by sending f
eedback for the ones they like and ones they find irrelevant. This could really be a breakthrough solution and the panel about Generation Z shows they could be right.

Gen Z, 12 to 19 year-olds are the most progressive age group, they are sophisticated, savvy and really hard on brands. They want to have a conversation and engagement with brands, they don’t want to be marketed to. They are big activists for causes, and are more engaged with sustainability and politics than anyone would assume. They are also constantly told that sky’s the limit, and with all the tools at their disposal, they can reach millions of people, so their possibilities are really infinite.

As expected, Big Data was one of the buzzwords at the Summit. But the interesting part is that more and more conversations are also about fast data or the speed needed to process it, which is the key to real time decision making or RTB. This all means that machine learning will in the future play a big role in retaining customer loyalty.

We love to show what we are doing or what we like and we show it all the time on different platforms and on various devices. That’s why a part of the Summit was dedicated to #FOMO or the Fear Of Missing Out. However, according to Davis Jakubowski from Facebook, marketers quite often forget about real people and their most personal device – their mobile phone.

“Native is king” and “mobile banners are the worst”

He explains that basic premise with native advertising UX is undisrupted because the ads are incorporated into the platform so well, they don’t annoy users.

He tells us that every campaign isWIP, and you should always challenge the status quo constantly.

AND NOW THE CONCLUSION

To achieve the best results, follow this key points:

This was the last year that Web Summit was held in Dublin, as it will be moving to Lisbon, so next year we hope to see you there! 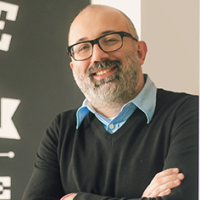 An advertising guy who went rogue and turned to the digital side, in love both with the creative and the metric part of the business. Has both of his feet firmly on the ground but his head is always in the clouds. Passionate about cooking, traveling, reading and good food.

All stories by Dubravko