Our sixth year is behind us. We are still a very young company, but we’re developing rapidly. This last year shows that through a lot of important events that happened.

We continued with rapid growth. Our overall revenue grew by 45% while the international part alone saw a 150% increase. On top of that, we opened an office in London to be even closer to UK and US markets.

2015 was the year we received Deloitte’s CEE Fast 50 award, which means we’re among the 50 fastest growing companies in the CEE region. We are a company that constantly grows and innovates, and being a part of this group is an immense honor.

Ever since we started Degordian, we wanted to create a workplace and company culture where people really want to work and where they feel comfortable. We are far from being an ideal company, but we’re constantly improving, and receiving an award for being one of the best employers in Croatia is a sign we’re going in the right direction. The award for the Best employer is one we cherish the most, and it being the third in a row is just the icing on the cake.

This year, we further improved our processes and quality of the services we offer, and our work is being recognised internationally. This was, by far, our most successful year because we won 2 Effie awards, an IdejaX GrandPrix, Mixx award, 2 European Design Awards, CSS Awards…

Our Mediatoolkit had an extremely successful year. In just one year, we increased our revenues more than 10 times. And in December alone, we had bigger revenues than in the first 6 months of the year combined. We launched a new version of Mediatoolkit with a bunch of new features, and the feedback and satisfaction of our customers has been great. In addition to revenue growth, and satisfied customers, our churn is close to zero. Now, we have more than 20 people in the team, a new office (across the street from Degordian), and we have the momentum that will make 2016 even better.

We started working on projects that are more complex and difficult than ever before, and that led to an 80% increase in average turnover per client. Some of the largest projects we worked on last year were the creation of Lufthansa’s Dreamscapes project that was simultaneously launched in 20 countries and a complete website redesign for Ožujsko, the biggest beer brand in Croatia, which received the Website of the Day award by CSS Design Awards. We also worked on international promotion for Zipt, an Australian telecommunications company, which covered more than 60 countries.

We contributed to the community by enhancing our cooperation with universities and holding lots of lectures for students. Help young people and preparing them to enter the business world is something we enjoy, so we hired dozens of new interns in all our departments – from design and development to account management and advertising. Last but not least, we became a part of the management board at HURA.

Our last year was packed with all kinds of entertainment. We had stand-up comedians, and we even created our own show, newspapers and our band. During the year, we organised more than 30 parties and even made our own breathalyzer to keep track on everyone’s drinking. ;) We organised a carnival, we flew with drones, played paintball and football. We had a blast! 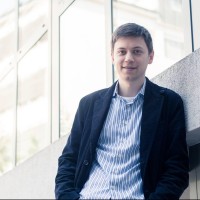 Performance oriented CEO with a strong sense for numbers and statistics, especially when it comes to measuring his employees' level of satisfaction. Loves spicy food and believes in lifelong learning.

All stories by Daniel