Last week, a part of our design & frontend team visited Amsterdam, not just to experience usual activities Amsterdam is known for, but also to attend the 3rd annual Awwwards conference that took place at the Royal Tropical Institute.

Two days filled with speeches from the best web professionals gave us the perspective of actual trends, future predictions and an overview of the current state in digital industry.
The highlight and the most anticipated moment of the conference was the Prize Giving Ceremony for best Web designs of 2015, which showcased only the best of web in a few different categories. Some of the winners are Basic agency in the best E-commerce site category (nixon.com), 84.Paris for site of the day (Because-recollection.com), Ben Guedj for Independent/Freelance of the Year and Watson/DG for the agency of the year.

To give a better look on the general feeling of the conference, each speech could easily relate to one of the 4 major topics of digital industry today.

In one way or another, the hot topics of this year’s conference were:

Josh Payton from Huge inc, with his characteristic approach and presentational style, talked about Missing connections, History, Bureaucracy, Ecosystems and Execution. He explained the difference about how airlines perceive passengers (as human cargo) and the real pain of being an airline passenger. Through it, we can see there is a lot of unused space for user micro-interaction in the user journey.

Payton noted that human behaviour is fundamentally changing as 57% of users use mobile for banking, 99% use their smartphones at home and up to 83% of users expect consistency. He also pointed out we should not over-rely on best practices when designing.

Vitaly Freidman shared some dirty little tricks from the dark corners of eCommerce. He pointed out a shocking fact that more that 68% of users abandoned online shopping cart. Surprisingly, the biggest issue was not the complicated checkout process or the payment method, but forced account creation and extra cost that was hidden and added at the end.

We should pay extra attention to:

Bart Van de Wiele from Adobe had a killer live demo presentation of Adobe’s new product, Project Comet, which is supposed to challenge the way we design and prototype.

The crowd went berserk as Bart walked us through the process of handling repeating operations while designing.

When we talk about Patrick Hamann’s presentation, one of the main takeaways was about the speed and optimisation – how much is there to shave off in regard of page speed load. He stressed out that performance is UX.

Topics that are always relevant and inspiring are ones related to processes. Due to a variety of different projects and approaches, all of us are interested to see how others do it and how to deal with ups & downs during the project phases. From our perspective, the most relevant talks were by Josh Brewer, Bjarne Christensen and Eva-Lotta Lamm.

Josh Brewer from Twitter had an opening speech and gave us a thought on how design thinking shapes corporation’s internal culture and structure. Designers are not only parts of production teams, but are capable of taking major roles and positions at the top of the company structure.

The example of this are some of the world’s most successful companies. We have seen that CEO’s and board representatives are usually designers and that definitely affects the way these brands operate, develop products and deal with competition.

Bjarne Christensen from Stupid Studio had a more agency-related speech. He talked about long-term client-agency relationship and how to ensure that both sides are satisfied with the delivered end-result.

The general idea he talked about was staying profitable on almost every project using a collaborative method between the client and an agency through a series of workshops and meetings. It was useful to see how different phases of the project should be charged and how to adjust client’s expectations. From the design perspective, it was really interesting to see how to delay visual design to later stages of the process, and how to avoid situations where a client is immediately attracted to visual segments of the project.

Kris and Simon from Resn shared their philosophy of perverting the web (“Perverting the perception of perversion on the web.” ). They talked about the idea to disrupt and move boundaries of digital concepts and how we use and perceive website layouts. They pointed out the importance of Design for the concept (don’t try to make the concept fit your style) and walked us through some nice examples of work they did for Adidas and Zero Landfill.

Although the presentation didn’t go as planned due to technical issues, Eva-Lotta Lamm demonstrated her awesome presentational skills through sketching and visual representation of any given idea. She managed to show us how sketching can boost our process and help us explain the hardest, most complex ideas and concepts just by using simple images or icons.

From our perspective, it was really useful to hear about different approaches to processes, taking it from smaller steps in the beginning to more complex strategic parts.

As we could already see, video is getting really big in terms of digital industry and web. Virtual reality, HTML5 and the recent death of Flash were said a lot of times in terms of supporting video technologies and serving the right interactive content.

Anrick Bregman from UNIT 9 had a presentation of virtual reality projects they did for clients such as Lexus and Stella Artois. It was really interesting to hear the experiences of using this technology that is still unexplored, but opens a wide range of opportunities for brands to tell stories and engage users.

Guys from Mediamonks showed us some of their best cases and how they use video content to connect users with brand products and stories. They also gave us a brief look on different types of video production for web and how their process really looks like.

In the spirit of projects that were not client-related, but much more focused on moving the boundaries with new technologies and approaches, there were two very interesting presentations. The first one was from Hi-res agency creatives who gave us a behind-the-scenes look of their recent project named Void 1 and 2. Void is the audio & visual web experiment which engages user to interact with “hypnotic” sounds and visual patterns. Besides the technology and process, they managed to explain how to have fun while doing self-initiated projects and make internet awesome again.

The other entertaining talk was by Greg Barth, and it gave us a look into his creative world of experimental videos.

Although the crowd didn’t hide fascination with the visual awesomeness of his work, we found  the background story of his most popular project, Fortune, to be was really inspiring. As Greg said, Fortune video was made out of despair, in a home setting and with zero budget, but in the end, it was the right recipe to win the Young Director Awards 2014 in Canne

The Amsterdam Awwwards conference was definitely a great opportunity to listen and meet some of the best professionals from the web industry. When we retrospectively look at the first Awwwards conference that took place in Paris and how much it has grown, we can’t but wonder how many new ideas and approaches will the next one bring. 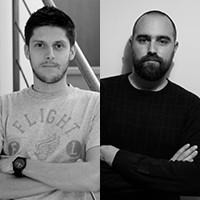 Design super duo with same interests but different specialties. A combination of Mario’s UX skills and Marko’s creative approach spices up every project. They say they're very proud of their 'communicating without talking' skill when they're working together.

Great walk-through, and thanks for the kind words! Always happy to leave people with something useable, and not just the eye-candy ;)